Quality of life - It means everything 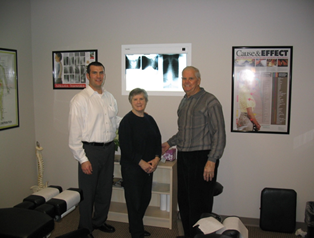 Elmer and Mary Louise of Utica , both in their 70′s, have begun utilizing the services of Dr. Miller, a local Chiropractor. “It really has made all the difference. We are now able to do a lot more, for longer periods of time and with far less pain. We only wish we had found this sooner.” Elmer said.

The general population is going to chiropractors in record numbers. Senior citizens, the fastest growing segment of the population, are no exception. According to an August 24th, 1999 article in the USA Today, more than 80% of senior’s age 65 or greater are aware of what the article termed “alternative medicine”. This awareness has led to a fast growing utilization of these services. The breakdown for usage of chiropractic and other non-medical health care is as follows: Chiropractic was the leader with a utilization of 32%, second was massage therapy at 16%, followed by acupuncture at 9%, homeopathy at 4%, and naturopathy at 3%.

Drs. Ryan and Mark A. Miller of The Family Chiropractor P.C., in Clinton Township , attribute this trend to the fact that patients are becoming more proactive when it comes to their own health. Dr. Miller states that, “today more and more people are taking action as it relates to their health. Instead of waiting for things to go wrong, living with daily pain, or finding more and more medications to take, seniors are benefiting from something within themselves, their body’s own recuperative powers to heal itself.”